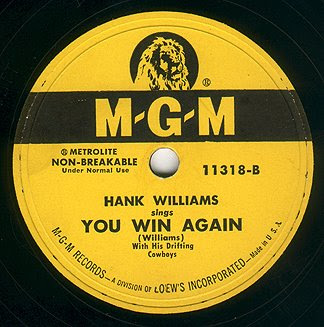 This heart of mine could never see
What everybody knew but me
Just trustin' you was my great sin
What can I do?
You win again

I'm sorry for your victim now
'Cause soon his head, like mine, will bow
He'll give his love, but all in vain
And someday say
You win again

You have no heart, you have no shame
You take true love and give the blame
I know that I should leave
But then I love you still
You win again
The Song:

"You Win Again" is originally a Hank Williams song. Beck's cover can be found on an old informal tape from the early '90s or so, of what seems to be him singing with friends at a get-together.

Also, in 2013, many years later, Beck performed "You Win Again" live on stage once.
Live:

In July 2013, Beck was performing in a concert in London, and for the encore brought out singer Bobby Gillespie from Primal Scream to do some duets. They did two songs, and one of them was "You Win Again." Beck played acoustic guitar and harmonica, and they both sang in country music harmony. It is pretty straight-forward and likely underrehearsed, but sounds nice.
Notes: