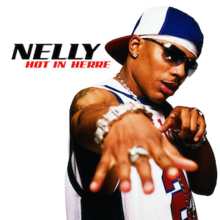 So hot, hot in here!

I was like, good gracious
Ass is bodacious
Flirtacious, tryin' to show patience
Lookin' for the right time to sooth ??
Lookin' for the right time to flash them keys
I'm leavin', keep believin'
Me and the rest of my heathens
Got it locked at the top of the Four Seasons
Penthouse rooftop, birds I feedin'
No deceivin', nothin' I'm misleadin', no teasin'
I need you to get up on the dance floor
Give that man what he askin' for
'Cause I feel like bustin' loose
And I feel like touchin' you
I can't, nobody stop the juice
So baby tell me what's the use?

"Hot In Herre" is a pop R&B hit from 2002 by Nelly. The song was produced by The Neptunes (Pharrell) and for a little while there, Beck took to covering lots of their productions.

During the August 2002 acoustic tour, Beck talked about "Hot in Herre" a few times on stage.

I gather that a few times on the solo tour of Europe, Beck played a bit of "Hot inÂ Herre," but not as part of a big funk medley. OneÂ I've heard was at the end of the show, right after "One Foot in the Grave," just with piano and drum machine.

The fun has continued into his summer 2003 USÂ tour, his new rock band jammed on the song fairly frequently! Fun stuff. Â It has grown from a snippet or a medley into a basically full cover too.

In 2005, the song would pop up every once in awhile--sometimes as an adlib during "Where It's At," once even in an acoustic set. One time (July 16), Beck and his band tried it, after Beck had announced "I just got an idea for something different."

Beck mostly left the song for awhile, but in 2013 once he did sing the chorus during the end of "Hotwax." Then in 2016, he did it a little bit during "Where It's At" once.