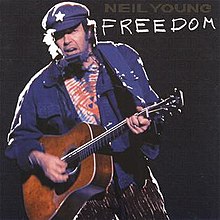 Versions:
Lyrics:
Rockin' in the Free World [Version (a)]:

Beck has performed twice at Neil Young's annual Bridge School Benefit Concert, a show to help a school for children with severe speech and physical impairments. Each year, it's a star-studded affair. In 1995, Beck appeared for the first time, and did a short acoustic set. His version of "It's All In Your Mind" from that night was released on the Bridge School Concerts cd. Other stars appearing in 1995 include Bruce Springsteen, Daniel Lanois, Chrissie Hynde, Aerosmith, and Hootie & the Blowfish.

Neil Young ended the show, and concluded his set with his big famous singalong rock song, "Rockin' in the Free World." Most all the artists joined him on stage for that one, and by all accounts Beck was one of them. He did not take a lead verse though, he left that to the stars like Young, Springsteen, and Steven Tyler.

The best explanation for this triumphant, We Are The Rock World free-for-all comes from Beck himself. A year later he reminisces about it all, not without the tiniest shred of irony (of course). ;-) He starts out with his "Heartland Feelings" "mellen-feeling, Springsteen style" speech, before segueing into reminiscing about the "Rockin' In A Free World" performance. Beck sure knows how to tell a tale! Nothing more needs to be added:


I played with [The Boss] last fall. He's probably a nice guy. I was playing in this Neil Young show. I was opening up. I was doing a soundcheck, but people were walking in, and I was sort of their musical usher. At the end, we all did a song together and it was pretty triumphant. All the people who grew up with Live-Aid, stuff like that, the end of the show where everybody gets out and plays together. Nobody does that anymore. I wanna see Smashing Pumpkins and Bush and Oasis and the Cranberries, and who are the biggies? All doing a song together, at the end of the show. They don't do that anymore. What would they sing? The older cats still do that! They were doing that at the show I was at. I was up there with Hootie and the Blowfish, Steven Tyler was there. Emmylou Harris and The Boss! It was a power trinity over on one side of the stage with The Boss and Hootie and some other exceptional things. That was a weird moment!...

Emmylou was good, but I felt bad 'cause she was on one the other side of the stage and The Boss and Hootie were on the other, so it was like this power spectrum. So I went over to Emmylou. Actually I was backstage watching the whole thing on the monitor, and I was eating... they finally busted out the backstage food. That's all they do backstage. It's a pile of chips and some rancid salsa. I was eating that, and looking at the monitor. 'Oh my god, look at that! They're doing it! Yes!' So triumphant, you know? It's not really acceptable to be that triumphant that much anymore...

But some guy suddenly grabs me as I'm watching on the monitor. Let me tell you, The Boss and Hootie are all sharing a mike. You know that move? They're all getting hard. . .I mean bicep-wise. Some guy grabbed me, I don't know who he was. Some stagehand guy. Shoved me out there and I was halfway between the stage and the mike, so I went up to Emmylou and I'd been eating that really bad salsa, you know. Emmylou is pretty refined person, but you do not want to release that thing on her, and I felt bad, because the chorus came. . .finally. . .we were all standing there. You know, on that side of the stage, it was all lonesome and on the other side they were all high fiving and stuff. It was real good. We were just 'Oh what do we do?' Then the chorus came on and they started singing, and I was 'Oh I'm supposed to sing the chorus?" I'm sharing the mike with Emmylou and I'm like 'ROCKING IN THE FREE WORLD!" and that salsa breath. . .phew! It went up that refined nose of hers, but she's a professional. She had a sour look on her face for a second, and she kept rocking. All apologies to Emmylou.