whiskeyclone.net   almost a ghost
top   lyrics   the song   live
It's All In Your Mind
By: Beck Hansen 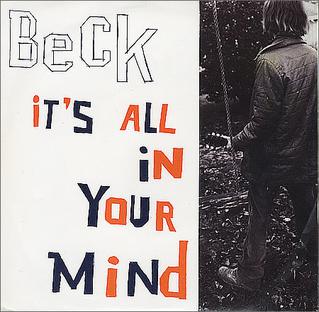 Versions:
Live Versions: [show/hide]
Lyrics:
It's All In Your Mind [Version (a)]:

"It's All in Your Mind" was originally released on its own single for K Records in 1995. Beck had already become well-known, and a short 3-track single of outtakes from his K sessions was released. Why "It's All in Your Mind" was an outtake in the first place is unclear, and somewhat hard to believe! It's a beautiful song. The single is only on 7-inch vinyl though (and the Japanese CD of One Foot in the Grave), so the song remained relatively obscure for awhile. (In 2008, Beck added the single to his Deluxe version of One Foot.)

The K Records single version is of course the rawest version of the song. The guitar sounds slightly less in tune, and Beck's voice sounded so young (naturally). The song is especially dour, Beck sounding as if he's in bit of a daze. After the third verse, a delicate guitar solo is overdubbed.

The Bridge School Concert is a yearly festival in San Francisco for a school for handicapped children. Neil Young runs the concerts, and gets all sorts of great artists to come and perform acoustically. Beck has played there twice. His first time was there was on October 28 1995, and his stunning version of "It's All in Your Mind" from that show made it on to the excellent compilation CD. I've always loved this version, and it feels so pure.

Anyway, "It's All in Your Mind" is such a simple and straight-forward composition. While the lyrics and music may not be overly complex, they do fit together so perfectly. Just two chords, repetitive lyrics, but it feels like more. I love the way the song just hints at more-sick stolen gifts, devils up sleeves-those tiny flourishes which make the song memorable.

And then, wow, eight years later, Beck recorded the song again for Sea Change. I gather that producer Nigel Godrich was really loving the song, which somehow broke out in the studio, but likely was not fully aware that it was an old one, already released. Nonetheless, very cool. And it fits so well in the Sea Change scheme. The way Beck sings "I wanted to be your good friend" gets me every time.

Nigel and Beck flesh out the background music, but appropriately subtly. A more delicate, picked guitar line has replaced the two-chord strumming. It remains hypnotic despite this. A touch of cello underlies it, as well as a light band backing. Beck sings "I wanted to be" three times instead of two. The song really does fit on the album, in sound and theme and mood, so that's what's really important.
Live:

Beck has performed "It's All In Your Mind" a good amount over the years, though it never really was what you could call a regular. It showed up every so often, mostly in 1994 and 1995.

While most performances of the song in the early years were just Beck on acoustic, alone, there are a couple of other noteworthy takes.

The earliest known performance of the song was on January 26 1994. Beck was backed by That Dog on the radio up in Olympia, WA. That Dog are a beautiful addition to the song. Petra Haden's droning violin is perfect for the song's aura, much like her playing on "Blackhole."

One of the best versions of the song was on one of Beck's yearly drop-ins on KCRW in Santa Monica, CA. In 1994, he brought Chris Ballew in with him, who in turn brought his two-string "bassitar." Here, the bassitar was a haunting addition to the song. The song feels more like a blues song this way. Brilliant.

On October 24 1994, the "It's All In Your Mind" is quite unique. Beck started the song with a lovely harmonica intro. After the first verse, he stopped, as the audience is being noisy. He shrugged, "oh well" and tried to begin the second verse, but doesn't get far before he's interrupted again. The crowd is acting up. He gave it another go, this time from the third verse, before spicing up the outro with a long harmonica solo. Then the big surpriseâhe ends by violently and oddly thrashing his acoustic guitar, while singing an extremely odd version of "Trouble All My Days."

"You all like bittersweet songs of sweet bitterness?" Beck asks before "It's All In Your Mind" on February 10 1997. As he has on most of the times he plays the song, he makes a comment to the crowd that they probably don't know the song. Unfortunately, this night, he gives up on the song immediately. "No I don't want to sing that," he says.

After not being played for about five years, Beck brought "It's All In Your Mind" back into the setlist of his gig on February 21 2002. The song was done just on acoustic guitar, with Justin Meldal-Johnsen on stand-up bass. Anyway, the next two nights, it was played again! Then a few weeks later it was re-recorded for Sea Change! YEA!

And thus, with it becoming part of Sea Change, this old gem of a song has returned to the setlists once again. Up first is a solo acoustic tour (August 2002), where Beck played the song about half the nights. He plays it alone (though sometimes Smokey added some guitar too).

One cool version on this August tour came during the last show, when he used a full band as backing. They were really subtle, but I find this arrangement to be better than the one- or two-man ones from earlier on the tour. There's some cool synth effects from Roger Manning Jr, and light drumming from Joey Waronker.

After that tour, Beck took on the Flaming Lips as his band for a few months, and they played "It's AllÂ InÂ Your Mind" pretty much every night they were togetherÂ (except for a couple of shows). This version does not sound too different from the take on Sea Change, except it's got heavier drumming and some interesting synthesizer sounds on top.

After the Lips left, Beck took a band to Australia and Japan and did the song a bit there. April 2003 was a solo tour of Europe, and Beck played "Mind" six times. The remainder of 2003 was touring with a new band and the song was played quite regularly.

The song basically vanished after the Sea Change years. Once in 2005, he did a little medley of old songs during his acoustic set, and "It's All In Your Mind" was one of them. He may have done that a few other times that didn't get reported, but for the most part, the song has vanished for 8 years.

In the summer of 2013, Beck was playing some low-key gigs, some with minimal bands, a lot acoustic in nature. On July 2, Beck had just a bassist and pianist with him and they brought "Mind" back to life. This mini-band did the song together 3 times that week.

Later that month, Beck played some acoustic-based shows and included "Mind" four more times. I believe they were each performed with the band, though sometimes they did a drummer-less band thing for half the show and that's where "Mind" was played.

The song however has not been played through the Morning Phase tour of 2014, or beyond.