whiskeyclone.net   almost a ghost
top   lyrics   the song   live
Half & Half
By: Beck Hansen, Brian Burton 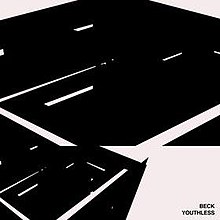 Half of you doesn't know nothing
And half knows too much
Half of you is reaching for something
The other half can't touch
How can I know which one
I'm supposed to try to love?

Half of you feels like it's dying
And half has just been born
Half of you is tearing out roses
And half is full of thorns
How can I know which one
I'm supposed to try to ignore?
The Song:

"Half & Half" was the b-side for "Youthless," and was also made available on an expanded version of Modern Guilt.

I recall some articles which indicated that Beck and DangerMouse, upon first meeting up, bonding over 60s psychedelic pop music. This song is firmly in that style, with echoed vocals, organ-style synthesizers, lyrics about love, buzzing electric guitars, and 2-minute length. It's a nice recording. The lyrics can feel a little gimmicky to me, but are still relatively clever and a straight-forward exploration of the confusion of love.
Live:

This song has never been played live.