whiskeyclone.net   almost a ghost
top   lyrics   the song
Thanks A Lot
By: Charlie Rich 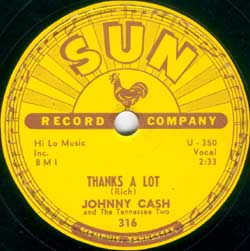 Versions:
Lyrics:
Thanks A Lot [Version (a)]:

Thanks a lot
The Song:

Beck, in 2006, right before starting a tour, took his live band to Nashville and recorded a bunch of country cover songs. Beck said in an interview they did a Johnny Cash song. A member of his band told me the same thing, and in trying to remember the name of the song, he sang to himself "thanks a lot." So I am assuming the song he was remembering doing was "Thanks A Lot."

So far the only song we have released from these sessions is "Forget Marie." Beck also said in an interview that he did a Johnny Paycheck song, as well as a Louvin Brothers song. All other songs are unconfirmed, but could likely include "You're Running Wild" (probably the Louvin Brothers song), "Stormbringer," and "Winter Is Blue."

"Thanks A Lot" was originally written and recorded by Charlie Rich in 1958, and then Johnny Cash did a more known version a year later.