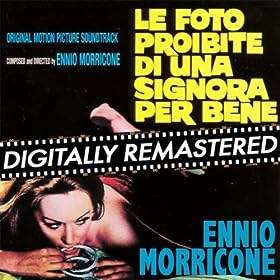 a.k.a. TV in the Kitchen

[This is an instrumental.]
The Song:

"Allegretto Per Signora" is a originally by Ennio Morricone, from his soundtrack to the film Foto Proibite Di Una Signora Per Bene. It is also found on a compilation album called Mondo Morricone. It is a smooth funky riff, and a very cool recording.

So how did Beck and his band use the tune? Usually as a wild jam at the opening of some of the concerts on the Odelay tour. It was a pretty exciting intro which set the stage for a grand Beck entrance. Normally, Smokey Hormel stepped up to the mike in the middle of the song to make some grand announcement like "Ladies and gentlemen! Give a big [insert city here] welcome to BECK!!" Beck then runs out shouting stuff like "Are you ready for some sex?!" or whatever to get the crowd revved up. (You had to be there.)

It is also worth mentioning that not EVERY funk jam the band played was necessarily "Allegretto Per Signora." For example, the show in Paris, on November 29 1996, kicked off with a much more standard funk riff.
Live:

This has only been played live, probably only in 1997 (the second half of the Odelay tours). It was frenetic, crazy, and of course, quite an appropriate way to kick off a Beck concert. Most of the time, it segued directly from a short DJ Swamp scratching intro (great example, July 6 1997 in Belgium).

One of the better and more well-known performances was played on PBS' Sessions TV show, where it led off the second half of the set.
Notes: