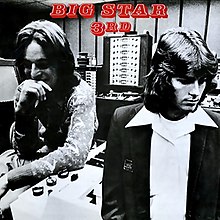 I first saw you, you had on blue jeans
Your eyes couldn't hide anything
I saw you breathing

Oh I next saw you, you was at the party
Thought you was a queen, oh so flirty
I came against..

Didn't say excuse, knew what I was doing
We looked very fine as we left the party
Oh mmm

Like St. Joan doing a cruel jerk
Oh I want you like a kangaroo
I saw you breathing
The Song:

Beck, in 2005, was asked what the best love song is, and "Kanga Roo" was his response. The song was originally by Big Star, and can be found on their album, 3rd. It is a folk song at its core, but just drenched in dissonant feedback and electric guitar. Beck has been a big Big Star fan, and has also covered Chris Bell's "I Am The Cosmos" (Bell was in Big Star too).

The song appeared on Beck's iPod list in early 2002, which was published as an article in a newspaper. A few months later, on his solo acoustic tour, he began covering "Kangaroo."

When asked about it, Beck explained the appeal (Uncut Magazine, December 2002):


I had a room-mate who played 'Kangaroo' all the time. It's haunted, it's got a beautiful melody and the lyrics describe something incredible. It's got a sense of the sublime, a feeling of grace. When I hear it now I always think of that movie Jesus' Son, when he sees the girl who's going to be his tortured undoing at the party. It is such an intense, romantic moment.

Alex Chilton, the songwriter, died in 2010, and Beck put up 2 bootleg recordings of him doing this song on beck.com as a tribute. Along with it, he wrote that this is "one of my favorite songs from one of the best songwriters who ever lived."
Live:

On February 14 2003,Â Beck played his first "Kangaroo" with the band behind him.Â Â It is Valentine's Day, and Beck says it is one of his favorite love songs.

In March 2003, Beck went to Australia and Japan, and played it twice in the solo part of his shows. At the one show in Australia, he did note how it was an appropriate song to do there. :-)

April and May 2003 saw a solo tour of Europe, and Beck did "Kangaroo" five more times, I believe all on acoustic guitar.

At the end of 2003, Beck covered "Kangaroo" at a couple of special appearances, once on the BBC and another at a KCRW concert. Beck made a surprise set at Coachella in 2004, and played "Kangaroo" there too.

Beck then didn't play the song for 9 years, until the summer of 2013 at an acoustic gig in London.