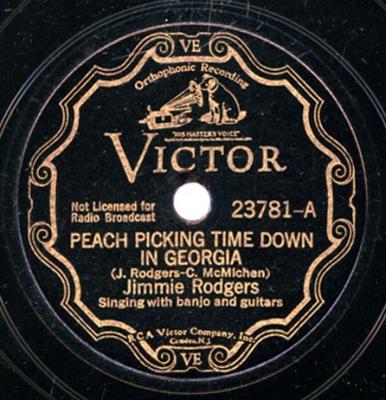 [From Beck/Willie duet on The Tonight Show:]

Well, there's bluegrass down in Kentucky, Virginia's where they do the swing
Carolina, now I'm coming to see you in the spring
And Arkansas, I hear you calling, I know I'll see you soon
That's when I'll do a little pickin' underneath the Ozark moon

Now when hard times overtake you, I hope they don't get me
I got a little sweetie waiting for me down in Tennessee
I know I'm gonna see her, I hope it won't be long
That's where we'll pick a little cabin, call it our mountain home
The Song:

"Peach Pickin' Time In Georgia" is a famous old country tune from Jimmie Rodgers. Beck has also covered his "Waitin' For A Train" a number of times.

"Peach Pickin'" is a song Beck had done on stage a couple of times, as a duet with the great Willie Nelson. The two times they did it together was at Farm Aid and on the Tonight Show. Beck and Willie swap verses (Willie's in italics above), and then duet at the end. It's a good performance, if nothing striking, but Beck enjoys working with Willie (and vice versa). They would later record a duet, another cover song, "Drivin' Nails in my Coffin." Nelson had also appeared in the video for "Jack-ass."

"Peach Pickin'" was performed first with Willie Nelson while on the Tonight Show in 1997, promoting the upcoming Farm Aid Festival. It was then performed the next week, again with Willie, at the actual Farm Aid show.

Then Beck first did it without Willie Nelson, at the now-legendary "country" concert on November 19 1997. It also shows up in a report of an acoustic setlist at a show in Australia in 1998.

Beck played this while in Georgia (of course) on his solo acoustic tour in August 2002. For some reason, it was just the first verse, but it was a nice gesture.

After that, Beck stopped playing the song. In 2014, on his Morning Phase tour, I've included it on around 10 more setlists, but it was just Beck dropping a couple of the lines ("it's peach-pickin' time in Georgia / it's gal-pickin' time for me") in "Debra." A strange mix of country and soul, but the lines definitely fit "Debra"!