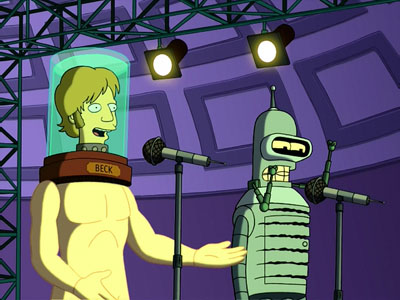 Ladies and gentleman, broken heaps of machinery...
This is a song called "My Broken Friend."

People say my broken friend is useless, but I say his mind is free
There's a lot of things my mangled robot friend could be...
Kick it!

Well, he could make a good hat rack
He only has to stand there
Or a cheap doorstop
He doesn't need to move
Or a great big giant thermos with a twist-off top
That would be good for soup
He could be a storage closet for outdated pants
I like 'em tight
My broken friend could do it all
Just give him a chance!

That robot has a tragic secret that I'd like to share
For real?
My broken friend is closer to me than an ass to a chair
Mmm
That robot's name I never told you
Who's that?
You could not foresee
C'mon, give it up!
I'll say it loud and sing it proud
His name is you and me!

Many years in the future, Beck performs on stage at Bend-Aid with his friend, Bender the Robot. The show is a benefit for broken robots, and Bender premieres his new big hit song "My Broken Friend." Beck sings back-up (the bolded lyrics above).

The song ends on a sour note as Bender accidentally reveals that he is not in fact a broken robot. This unfortunate turn of events angered all the real broken robots, Beck, and Art Garfunkel.
Live:

"My Broken Friend" appeared in the set after a kick-ass version of "Where It's At," which was highlighted by Bender's washboard solo, and a 3-hour take of "Sexx Laws" (the band had a serious thang goin').