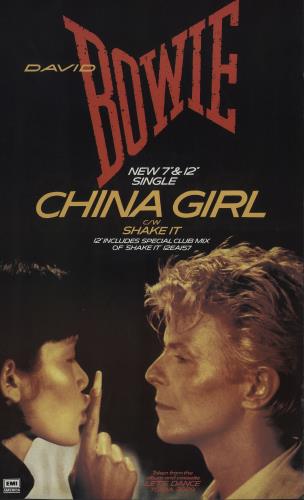 "China Girl" is a song originally by David Bowie and Iggy Pop. They put it on Iggy's album, The Idiot, in 1977 (Bowie was the producer). Six years later, Bowie recorded the song himself with producer Nile Rodgers, for his album, Let's Dance. It then became a pretty big hit song.

Beck's band has been including many covers during band introductions in the middle of a long "Where It's At" jam throughout 2016-2017. In June 2016, Jason Falkner was introduced and he started in on the "China Girl" riff (from Bowie's version) -- and Beck picked up on it and would sing some of it. (Though, he would change the words, singing "my Jason Falkner" in the melody of "my little China girl" and things like that).

Jason would continue to do the song on occasion through 2017 as well. (It wasn't Jason's top choice of song to do in his introduction, but for a couple years it was up there.)

After 2017 though, Jason seems to have dropped it as far as we're aware.
Live: