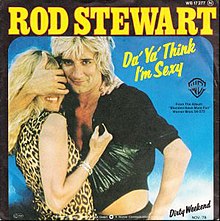 Beck covered it twice on stage in 2014, doing it as a duet with Jenny Lewis (who was opening those two shows).

Also, after Jenny left the tour, occasionally the band would break into the song's riff during "Where It's At" jams, though Beck did not sing anything.
Live:

As I wrote above, Beck played full covers of "Da Ya Think I'm Sexy" twice in 2014. Both were duets with Jenny Lewis. Here is one of those:

The other times Beck has done the song were within medleys, without Jenny. During "Where It's At" that year, Beck would introduce all his band members, who upon introduction would solo for a minute on their respective instruments. Roger played a number of different songs/riffs across the year, and 3 or 4 times included "Sexy." Beck never sang anything of the song during those times, though.