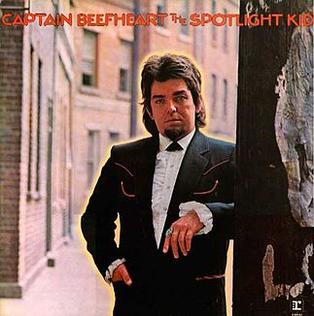 Now here you come, baby
With your tail draggin' in the gravy
You know your P's and Q's
But what you don't know, baby
Is you're giving me the blues
You got juice on your chin
And eggs on the drainboard
A pie on the wall and dirt upon the rug
I come home late and I stumble and I swore
You won't even give me a hug
You had my things all laid out by the door
I'm leaving! I'm gonna take up with a mermaid
And leave you land-lovin' women alone
Leave you land-lovin' women alone

Now here you come baby
With your tail draggin' in the gravy
You know your P's and Q's
What you don't know woman
Is you're giving me the blues
The Song:

"Grow Fins" is a brilliant song from Captain Beefheart's album, The Spotlight Kid. It's a bare, harmonica-drenched recording with some great lyrics.

Beck has been a pretty devout Beefheart fan for awhile now. An actual cover version was long overdue! Beck once listed the legendary Captain Beefheart as one of his favorite musicians, and has consistently referenced him over the years, both in interviews and his music. When asked about the influence, he said:


[Captain Beefheart] was something I heard when I was 23-24, later in life, after I'd already been performing a while, and I was already so immersed in blues, and free form poetry and a lot of the same elements that make up his music, so hearing him was eerie, you know. I felt like somebody had already done what I was trying to do. It felt like I had discovered some island, and he had been living there for 500 years.

Mellow Gold builds on a lot of these things. As Beck said above, he was immersed in blues and folk and free form poetry, which are the defining characteristics of both Mellow Gold and much of what Captain Beefheart did. Nearly every song on Gold has something in it you could call "Beefheart-like." In later years, Beck's songs have been less free form, in many ways, but songs like "Broken Train" or even "Static" continue to carry Beefheart's legacy of deconstructing the blues.
Live:

Beck played this song during his concert on February 24 2002. He played it on the piano!

"Grow Fins" was played one other time on August 17 2002. Smokey played some distorted electric guitar, Roland the Drum Machine was going strong, and Beck played harmonica, jammed on piano, and sang. Afterwards, he commented "You probably won't see that again!"

So far, he's been right.
Notes: