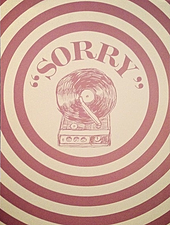 I've been walking around again
Tongued tied over the town again
Stranded out in the hall
Thrown right over the wall
The Song:

Beck wrote "Sorry" for his Song Reader project. He has played it live a few times, but like the rest of the book (except one song), Beck has not recorded it. Presumably he did record private demos of the tracks though. On the official Song Reader cd, Laura Marling performs "Sorry."

"Sorry" is a simple song, and one of the more minimal ones on Song Reader. It reads to me like it came straight out of Beck's Sea Change world, a mostly-straightforward song of lonesomeness.

Beck did perform a few of the Song Reader songs live after the book came out.

"Sorry" was one he did throughout that summer, having played it 6 times. He played it himself at a handful of more "acoustic"-oriented shows in summer of 2013, as well as one Song Reader live event.