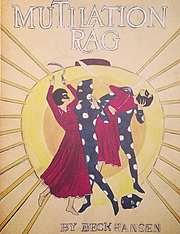 "Mutilation Rag" is one of the main songs found in Beck's Song Reader project. It is an instrumental. Sheet music had a lot of instrumentals, and often they had bizarre names. Beck borrowed the title from older piece of sheet music (as well as adapting the artwork.

As a side note, this older "Mutilation Rag" was written in 1915 by a 15-year-old. This link calls it an "extraordinary composition" which mutilates Rachmaninoff's Prelude, Op.3, No.2.

Beck's piece has some pretty hilarious instructions for how to play it on the piano, calling it "a struggle between the Right and Left Hand." Then, using the comments above the notes, where there are usually musical instructions, a little story is laid out:


All is well; the song begins like any other
The usual routine
Two hands in accord
A slip
Something's gone wrong
Mind your own business
I was

The Right Hand causes offense
Growing uneasiness now, the Left Hand tires to bring the Right back around
a disagreement


I do not know musically if Beck's piece mutilates an older classical piece (that seems to have been a genre of sheet music in the early 1900s).
Notes: